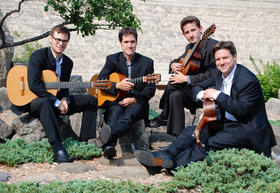 Fanfare magazine says of the Canadian Guitar Quartet, “One cannot imagine better ensemble playing.” The group has often been featured on national broadcasts in the Americas and Europe, on a “Classical Guitar Alive” webcast from the United States, and with orchestras across the globe. The quartet’s 2007 New York City debut on the 92nd Street Y’s “Art of the Guitar” series was enthusiastically received with several standing ovations, and CGQ’s three recordings have won awards and international critical acclaim.