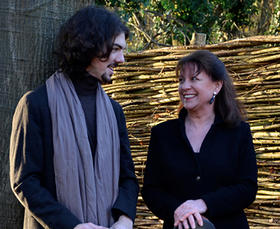 In this historically authentic presentation, Raphaella Smits and Adrien Brogna play mid-19th-century repertoire on eight-string guitars. These instruments expand the guitar’s register, allowing for the historically accurate performance of repertoire by such influential composers as Mertz and Coste. In fall 2014 Soundset will release the first recording by these two exceptional artists, who have earned international acclaim for their faithful interpretations and unmatched musicality.