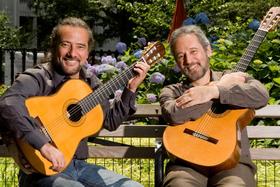 Setting new performance standards, brothers Sérgio and Odair Assad have played a major role in creating and introducing new music for two guitars. Their repertoire includes original compositions and arrangements by Sérgio Assad, transcriptions of baroque keyboard literature, and adaptations of works by such diverse figures as Gershwin, Ginastera, and Debussy. This season they are performing alongside Brazilian jazz guitarist Romero Lubambo – renowned for his fluency in any musical setting – who brings his improvisatory skills to music drawn from his Brazilian roots and influenced by American jazz.